ZERO HEDGE — As we slip deeper into the euphoria of what is now the longest bull market on record, resulting in a deluge of corporate “zombies” , the initial public offering market is similarly slipping into a noxious trance of its own, welcoming to U.S. exchanges record numbers of companies that lose money. According to a new report by the Wall Street Journal, a record number, or 83% of US listed IPOs over the first three quarters of 2018, were companies that lost money in the 12 month prior to their going public.

According to the WSJ, this is the highest proportion on record dating back to 1980.

Not only that, but investors who have been buying these money-losing companies have been rewarded. Stocks of companies that lose money and list in the United States this year are up an average of 36% from their IPO price. This actually outperformed the return for IPO stocks that are posting positive earnings, which came in at 32%. Both beat the S&P 500, which has returned 9% over the same course of time.

And because it’s this easy to conjure money out of thin air, new listings have surged. During the first three quarters of 2018, $50 billion in IPO money has been raised by more than 180 companies. This puts this year on track to be the busiest year for IPOs since 2014. […]

Pat Buchanan: The assault on Kavanaugh is the playbook for what is planned for Trump

WND — Judge Brett Kavanaugh’s nomination to the Supreme Court was approved on an 11-10 party-line vote Friday in the Senate Judiciary Committee. Yet his confirmation is not assured.

Sen. Jeff Flake, Republican of Arizona, has demanded and gotten as the price of his vote on the floor, a week-long delay. And the GOP Senate has agreed to Democratic demands for a new FBI investigation of all credible charges of sexual abuse against the judge.

Astonishing. With a quarter century in public service, Kavanaugh has undergone six FBI field investigations. They turned up nothing like the charges of sexual misconduct leveled against him these last two weeks.

In his 30 hours of public testimony before the judiciary committee prior to Thursday, no senator had raised an issue of a sexual misconduct.

But if Brett Kavanaugh is elevated to the Supreme Court, it will be because, in his final appearance, he tore up the script assigned to him. He set aside his judicial demeanor to fight for his good name with the passion and righteous rage of the innocent and good man he believes himself to be.

He turned an inquisition into his character and conduct as a teenager into a blazing indictment of the Democratic minority for what they were doing to his reputation and his family. […]

Many people are having a hard time understanding jurisdiction, but it is simple enough once you wrap your head around it.

When you enter a new jurisdiction it is like crossing a border into a different country. Different laws and standards and even different languages apply. Unfortunately, there is no well-marked border crossing and you can slip back and forth across the jurisdictional border without being aware of it.
Therein lies the proverbial rub.

You were all born in what is called “Original Jurisdiction” — the land and soil jurisdiction of the States and People.

However, thanks to Breach of Trust and legal chicanery on the part of the British Monarch and the Government of Westminster and the British Crown, you are purposefully mis-identifed within a few days after your birth and registered as a British Territorial Citizen.

This falsification of the Public Record results in you being “presumed” to be a subject of the Queen, strips you of all your Constitutional guarantees, and holds your Good Name and Estate as chattel backing the Queen’s debts. It also places you in a foreign jurisdiction.

You are supposed to be a man living on the land and soil of Illinois — for example, but instead, soon after your birth, your Name and Estate are “unlawfully converted” and suddenly, instead of living in Illinois, you are residing in the British Territorial “State of Illinois”.

You have crossed the imaginary border between the land and sea and in effect, entered a nightmarish Land of Oz. You have left your Original Jurisdiction on the land and soil of the American States, been disguised as a foreign British “vessel” and unknowingly cast adrift in the foreign international jurisdiction of the sea. All without leaving your crib.

Instead of speaking plain English, you are are now supposed to know and speak “Federalese” — a foreign derivative language full of “terms of art” and deceit, where the word “person” suddenly means “corporation” and the word “human” refers to a “monster” and the words “state, State and United States” all mean “the District of Columbia Municipal Corporation”.

Obviously, a British Territorial Citizen is very much like a slave. They are “presumed” to have voluntarily donated everything they are and own — their bodies, their assets, their names — to the Queen and the British Crown Corp, in exchange for “privileges and benefits”, which the slaves pay for themselves.

And you are told nothing whatsoever about all these cozy arrangements and presumptions. Neither you nor your parents are ever informed by your worthless, dishonorable Trustees. Yet this unconscionable contract is enforced upon you just as rigorously as if you had actually, consciously, willfully signed up to act as a Warrant Officer in the British Merchant Marine Service.

It’s enforced upon you by members of the Bar Association, who are all Undeclared Foreign Agents working for the Government of Westminster and/or the Queen, and all holding “Titles of Nobility” as “knights” or “esquires” of these foreign governments.

That’s why they have in fact been prohibited from holding any Public Office or position of trust in our actual land jurisdiction government since 1819.

Some of these men and women are in on the joke and know full well that you have been mis-identified and kidnapped without your knowledge or consent into their foreign jurisdiction, the better to prey upon you and seize your assets.

Most of them are simply trained like dumb animals to do a job without thinking too deeply about it, and are victims of this “System” just like the rest of us.

Anyway, this is how you came to be in their “Land of Oz” reality: you were shanghaied into their jurisdiction.

And how, Dorothy, do you get home again? How do you cross back over that imaginary border and get back to your Original Jurisdiction, where there are no Flying Monkeys and you can tell the Wicked Witch to stuff it up her Royal Bum?

It’s not quite as simple as clicking the heels of your Ruby Slippers, though it should be.

Our Living Law Firm Team has been painstakingly, step by step, researching the question and developing the ways and means of correcting the Public Records and as we go, sharing the information with all of you, to help you reclaim your Good Names and Estates and get back to Original Jurisdiction one-by-one.

But obviously, this is a major educational effort, frought with various obstacles, and such one-by-one return to the land and soil is not going to happen quickly enough to save the vast majority of Americans from the Creditors of these British Bunko Artists.

Remember — as a British Territorial Citizen you are presumed to be “standing” as chattel and collateral for the Queen’s debts and also the debts of the British Crown. And they all claimed bankruptcy protection. So where are you now?

Right in the cross-hairs of the international banks, coming to collect on all this British debt that we supposedly underwrote.

In response to this, we have placed international liens on the British Territorial States of States and the Municipal STATES OF STATES and together with the Federal State Trusts, have rolled all the assets back to Original Jurisdiction.

You are living in Illinois again, not the State of Illinois, and that means — although it takes time for the word to get out– that the “legal presumptions” have to change, too. The Bar Association Members and their Courts can no longer just assume control of you or seize your assets or distribute your property as they see fit.

They have to assume that you are an American, not a British Territorial Citizen.
You can grab Toto in your arms, and say, “I’m an American National born in Kansas on the 4th of February 1952 and I act in no other capacity.”

You still have to correct your own Public Records. Still have to claim ownership of your own Good Name and Estate. (www.annavonreitz.com, Article 928) And soon you will need to come forward and enter Uniform Commercial Code (UCC) Claims, too, just for good measure.

You will have to learn about jurisdiction and all the choices you have open to you as ways and means to conduct your own affairs, but the worst of it is over.

Dorothy is back in Kansas, and she brought her little dog and her farm and Auntie Em back with her.

—————————-
See this article and over 1200 others on Anna’s website here: www.annavonreitz.com
To support this work look for the PayPal button on this website. 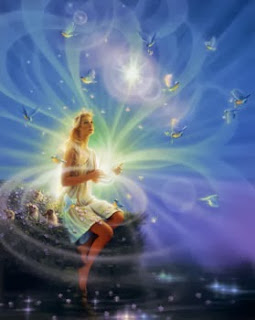 Spirals of Higher Influence become apparent to all
by ÉirePort

Spirals of Higher Influence become apparent to all.

Flares of Illumination are sent to all.