The post Cosmic Briefing with David Wilcock & Corey Goode 2019 appeared on Stillness in the Storm.

The world’s leaders will have no choice but to acknowledge that under their radar, a second South Africa-style apartheid state has been declared 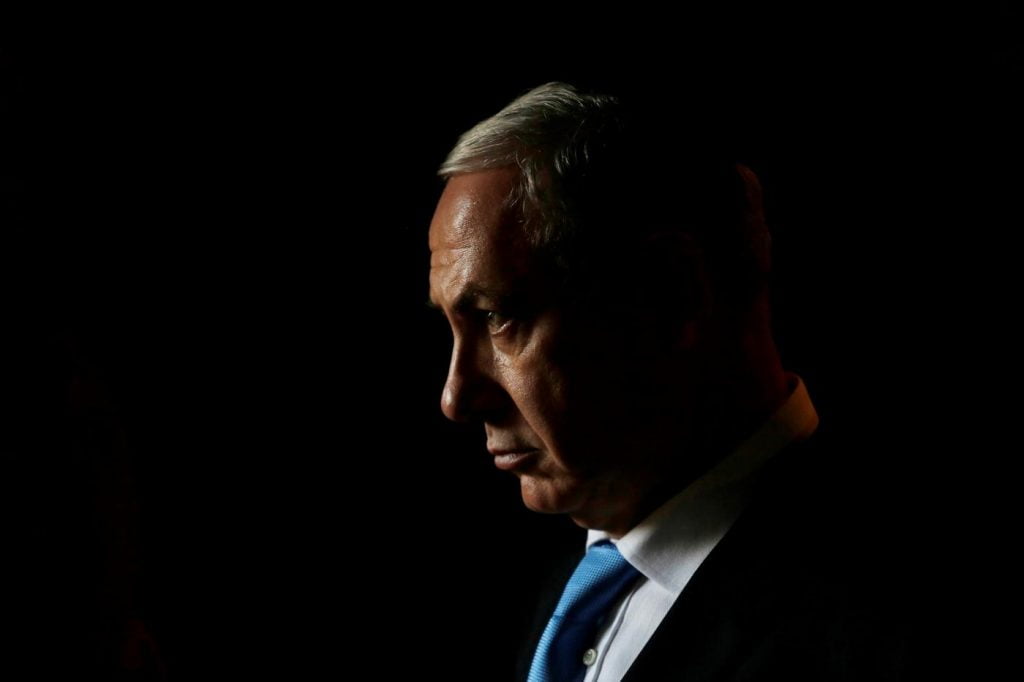 The world revolves on its axis, nothing has changed, even after the recent election in Israel.

Chosen to lead Israel for the fifth time, Benjamin Netanyahu is poised to instal the most nationalist and rightist government in the country’s history – and meanwhile the world seems to proceed as usual.

For decades now, Israel has continually spat in the face of the rest of the planet – with casual disdain for international law, and with complete disregard for the explicit decisions and detailed policies adopted by global institutions and by most of the world’s national governments.

Netanyahu is taking Israel much farther afield, to places even more extreme

Out there in the world, however, all that spittle somehow passes for raindrops. The election came and went with no discernible effect on the blindly automatic support for Israel by European governments and, of course, by the Americans too: unconditional, without reservations, apparently unchanged. Evidently what was is what will be.

Israel, though, has changed during the course of Netanyahu’s long reign. This talented Israeli statesman is leaving his mark on the profile of his country, with deep and lasting effect – more so than anticipated or even apparent.

Yes, it’s true that leftist governments in Israel also did their utmost to preserve the Israeli occupation forever and had no intention, not for one moment, of ever bringing it to an end – but Netanyahu is taking Israel much farther afield, to places even more extreme.

He is damaging what constitutes acceptable governance within Israel’s recognized sovereign territory, even with respect to its Jewish citizens. The very face of the “only democracy in the Middle East”, which has long functioned mainly to the benefit of Jewish Israelis who comprise its privileged class, is being altered now by Netanyahu and company.

Darling of the West

Meanwhile, incredibly, the response of the world is to alter nothing in the support it has been extending to Israel during all the years of Netanyahu’s rule, as if in this latest round he were changing nothing, as if the shifting positions taken by Israel will neither augment nor diminish that support.

With or without Netanyahu, Israel remains the darling of the West. No other country enjoys the same level of military, economic, diplomatic and moral support, no strings attached. But the next Israeli administration, the fifth Netanyahu government, is getting ready to announce a change that the world will finally find difficult to ignore.

Israel’s main asset, in casting itself as a liberal democracy that shares values dear to the West, is about to be demolished

The new government is poised to rip the last layer of mask from its real face. Israel’s main asset, in casting itself as a liberal democracy that shares values dear to the West, is about to be demolished.

Will the West continue supporting it, then? The West, which demands that Turkey adopt deep changes before according it full admission, which levies sanctions on Russia the moment it invades Crimea, will this West go on supporting the new Republic of Israel that Netanyahu and his governing partners are preparing to launch?

The degree of change expected cannot be overstated. Israel will look different. Where the previous government lit fires, this one will fan the flames as they spread. The judicial system, the media, the organizations defending human rights and the rights of Arabs in Israel will soon feel a scorching  sensation.

Op-ed articles will soon be denied publication in Israeli media, by law, if they criticize Israeli soldiers, for example, or support a boycott of Israel. Ben-Gurion Airport will deny entry more broadly to critics of the Israeli regime.

Civil society organizations will be stripped of legal standing. Arabs will be more thoroughly excluded en route to actualizing the vision of a Jewish state all of whose legislators are Jews. And of course there’s the annexation currently waiting in the wings.

The new government will be the Israeli annexation government. If the anticipated backing from Washington is forthcoming – American recognition of the annexation of the Golan Heights was the first step, the trial balloon – then Netanyahu will take the step he has refrained from taking throughout his reign thus far.

He will announce the annexation of at least part of the occupied territories.

The import will be unequivocal: Israel will admit for the first time that its 52-year military occupation of the West Bank is here to stay; that it is not, as long claimed, a passing phenomenon.

The territories are not “bargaining chips” in negotiations for peace, as was claimed at the outset of the occupation, but rather colonial holdings meant to remain under Israeli rule permanently. There is no intention that the territories annexed now, which could then be expanded, would ever be returned to the Palestinians.

Thus the new Netanyahu government will declare two dramatic policy changes. First will be an end to the two-state solution which even Netanyahu supported and which all global leaders have declared themselves as favoring.

That option will be declared dead. At the same time, Israel will declare itself an apartheid state, not just de facto but now, for the first time, also de jure.

Since none of those favoring annexation intend to grant equal rights to Palestinians in the territories to be annexed, and since targeted annexation of the land on which the settlements sit is patently deceitful, the world’s statesmen will have no choice but to acknowledge that under their radar, in the 21st century, a second South Africa-style apartheid state has been declared.

Last time around, an apartheid regime was miraculously brought down without all-out bloodshed. Will the world rally around this time and effect a repetition?

Which Israel do you still support?

This question must be posed first of all to the leaders of Europe, from Angela Merkel to Emmanuel Macron, including Theresa May – to all the EU leaders. They have endlessly repeated the mantra that their support for Israel and its right to exist in security are firm and unchangeable.

They have continually declared their support for a negotiated two-state solution. So whom do you support now? What do you support? Which Israel, exactly? What world do you imagine you are living in? Perhaps in a dream world you evidently find comfortable, but which has less and less of a connection to the real world.

Will Europe manage to continue claiming that Israel shares its liberal values, when civil society organizations are banned in Israel? When nearly all the Zionist politicians in Israel declare that they have nothing whatever to discuss with the elected Arab legislators in parliament?

What do you support? Which Israel, exactly? What world do you imagine you are living in?

This sort of thing is politically correct in Israel, across party lines. And what of freedom of speech, so sacred in European discourse, when the 2019 World Press Freedom Index from Reporters Without Borders already ranks Israel as number 88 – behind Albania, Kyrgyzstan, and Viktor Orban’s Hungary.

This is the Israel you are supporting.

The West’s automatic support for a two-state solution also demands updating. Do you really believe, dear statesmen and stateswomen, that this Israel has any intention whatever of implementing such a solution, ever?

Has there ever been a single Israeli politician who wanted to, or could, displace some 700,000 settlers, including from occupied East Jerusalem? Do you believe that without a withdrawal from all of the settlements, which represents a minimum of justice for Palestinians, there is any prospect that such a solution would take hold and turn into a reality

One could note that most Western diplomats who are well-informed about what is going on have already known for a long time that such a solution is dead, but none of them has the courage to admit it.

Admitting it would require them to reconfigure all their positions on the conflict in the Middle East, including support for the existence of a Jewish state.

So the question is now: are you prepared to go along with this? Will you remain silent, stay mute, lend your support, and turn a blind eye to reality?

Those of you who are most concerned for Israel’s future should be the first to wake up and draw the required conclusions. Indeed, every person of conscience ought to be doing that.

The views expressed in this article belong to the author and do not necessarily reflect the editorial policy of Middle East Eye.

Gideon Levy is a Haaretz columnist and a member of the newspaper’s editorial board. Levy joined Haaretz in 1982, and spent four years as the newspaper’s deputy editor. He was the recipient of the Euro-Med Journalist Prize for 2008; the Leipzig Freedom Prize in 2001; the Israeli Journalists’ Union Prize in 1997; and The Association of Human Rights in Israel Award for 1996. His new book, The Punishment of Gaza, has just been published by Verso.

NEWS WARS — The season premiere of children’s cartoon Arthur featured a wedding between a male rat and a male aardvark.

The animated show, which airs on PBS in the United States, as well as other taxpayer-funded broadcast networks worldwide, kicked off its 22nd season with a gay inter-species union between Mr. Ratburn, a regular character, and his partner, Patrick.

“Arthur, along with his friends Muffy, Francine and Buster, like most elementary school students, are intrigued that their teacher has a life outside of school,” Variety explains in a description of the episode. “The students know their rodent teacher enjoys puppetry, playing in a rock band and bird watching — but getting married?” […]

ZERO HEDGE — Inspired by home-flipping reality shows and a thriving culture of newfound ‘experts’ in late state bubbles, young real estate investors in the Bay Area and Seattle are getting hammered amid a slowing housing market combined with payments on high-interest “hard money” loans, according to Bloomberg.

Sean Pan wanted to be rich, and his day job as an aeronautical engineer wasn’t cutting it. So at 27 he started a side gig flipping houses in the booming San Francisco Bay Area. He was hooked after making $300,000 on his first deal. That was two years ago. Now home sales are plunging. One property in Sunnyvale, near Apple Inc.’s headquarters, left Pan and his partners with a $400,000 loss. “I ate it so hard,” he says. –Bloomberg

As rapid price gains fueled a new crop of home flippers (2005 redux), young investors in areas which got ‘too hot’ are experiencing their first housing slowdown – and have been forced to take losses from properties sitting on the market too long. […] (Cobra) At the moment of the last Archon invasion in January 1996, the dark forces have created three main dark wormhole entry points to collapse the planetary Light grid.

The post COBRA | Situation Update appeared on Stillness in the Storm.