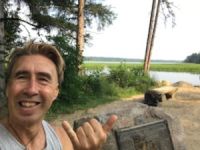 …I’m feeling very, very, very drained and spent. And the blogging is not feeling like it’s “connecting” my Higher Self to what it’s here for at this moment… which very likely is, I feel, to rest.

I’m going to say that all of us sometimes require a rest. What am I resting from?

I’m feeling the day in day out “pressure” to put stuff out there… put something out there… and if I don’t, it’s like something tries to punish my mind for not doing enough to help humanity.

That’s a very small self. The energies of that are very bleak. “Never “good” enough, you are”.

One reason I know I’m here, is to have a type of “resting place”, so that these “inner things” may unveil themselves and be released.

How do I release? Sometimes it’s actually to “yell” about it. Yell at it. And it may get to a point where I throw a few things around (tonight I threw a bag of popcorn into the next room). Just doing that brought out a few items that clearly were mine, that I’ve been holding on to.

So anyway, I’m just sitting down right now writing this, and that’s all I’m doing. Just describing my “state of discomfort”.

Then I’ll go into the “horizontal journeying position” (sleep in bed). Where more processing happens.

Stay the course, even if one knows not where it leads, or how it will “work out”. We’ve been there before.

The “Red/Russian Mafiya” is the politically correct slide or shadow language for what is more accurately the Jewish/Israeli Mafiya that came out of Russia and the Ukraine after the fall of the Soviet Union. At […]

In Section 1, Biden cited his authority as the “nationwide public health emergency, first declared by the Secretary of Health and Human Services on January 31, 2020.” Fig. 1.

Secondly, Secretary of Health and Human Services (HHS) Alex M. Azar II executed the underlying emergency on Jan. 31, 2020 when there were only five (5) COVID-19 deaths in the United States, according to the Center for Disease Control (CDC). Fig. 4.

Note that the World Health Organization of the British Pilgrims Society-controlled United Nations did not declare COVID-19 to be a pandemic until Mar. 11, 2020. Fig. 3.

Backdating a legal document is normally fraudulent on its face. The exceptions to backdating don’t apply here since this decision was so grave, affecting every man, woman and child in America. Proper diligence was swept under the carpet in his rush to execute.

This action begs the question as to why those five days were so critical.

On Jan. 28, 2020, the federal government indicted Harvard/Chinese nano-biowarfare researcher Dr. Charles M. Lieber in Boston. Lieber holds 66 U.S. patents in nanotechnology, much of it funded by Dr. Anthony S. Fauci and the National Institute of Health (NIH) as well as Harvard, DARPA, MITRE Corporation, Air Force Office of Scientific Research and the Office of Naval Research (each patent delineates the federal agencies that funded Lieber in the “Government Interests” section).

Researchers are now discovering Lieber’s nanoparticles in the COVID-19 vials.

By indicting Lieber, the Justice Department effectively shielded him from public scrutiny and questioning about his biowarfare activities in China just prior to the alleged Wuhan outbreak, which was likely biomedical propaganda used as a “false flag” scare tactic.

Lieber’s father, Robert I. Lieber, was a senior satellite engineer for Radio Corporation of America (RCA). He even received the David Sarnoff Outstanding Achievement Award in Engineering in 1962. His work on the Aegis satellite system for the U.S. Navy is integral to the deployment of 5G today. Sarnoff was a leading member of the British Pilgrims Society, as highlighted in Congress in 1940 by Rep. Dr. Jacob Throkelson (Montana 1st)

By backdating his national emergency to Jan. 27, based on only five (5) COVID-19 deaths—one day before Lieber was indicted, Secretary Azar protected his British Pilgrims Society’s super-agent, Dr. Charles M. Lieber, under the cover of a pandemic that he evidently knew was planned (another fraud), but for which Azar obviously jumped the gun, for some reason. He was 11 days ahead of his British U.N. WHO handlers.

This backdating, and its interlocked frauds, completely unwinds to COVID-19 nightmare that the British Pilgrims Society, and its sycophants in the American government, have put America and the world through since late January of 2020. Their agenda to implement medical genocide and their “new world order” tyranny, also known as “The Great Reset,” has become patently obvious to any reasonable person.

These criminals must be brought to justice by We the People in the United States and the Citizens of the World.

Lord Have Mercy and Godspeed to all who love liberty.

Note to readers: Tomorrow we will upload an audio, posted on this page, that explains why this information makes it very clear that

Donald Trump is a traitor to the United States.

Are you inexplicably naive, or just insane?
The “New” Republic you are trying to confuse with our Federal Republic is just another attempt to substitute your syndicate for our lawful government, and to impersonate us and our lawful government. It’s bushwah.
And nothing good or lasting can be built on bushwah.
So just stop. It’s unnecessary and stupid and we object to it and can see it for what it is from considerably more than a mile away.
The original plotters got away with substituting foreign “State of State” organizations for the American “State of State” organizations after the Civil War, but that was then and this is now. You won’t succeed in substituting your “Republic” for ours.
And now that we have dispensed with that ruse, let’s deal with the ridiculous “graphene is good” narrative.
Graphene is a poison that damages the nerve systems of the victims and causes blood clots, paralysis, and death. If you bought the bullshit you are peddling and got vaccinated yourself, you can expect that outcome unless you take very specific countermeasures.
That’s just for starters.
Graphene used as you describe in your second missive by the purported “White Hats” to play the music of the spheres and create “heaven on Earth” by artificially stimulating everyone’s nervous system with “beneficial sound frequencies” is complete, utter, inexcusable violation of the Universal Law of Freewill and the actual Creator will stomp you all like so many bugs.
He didn’t manipulate anyone, so how in the hell do you present yourself as a “Man of God” and pretend to have any such authority? Which “God” are you representing, you miserable excuse for anything approaching godliness?
While you deceitfully present this invasion of living flesh with billions of tiny knives as a good thing, you neglect to observe the equally obvious point that if the victims can be artificially “stimulated” to feel good and do good, they can just as easily and arbitrarily be “stimulated” to feel bad and do harm.
You are talking about the zombification and control of the entire population of the Earth and whether you are “intending” this for good purposes or ill, you need to be locked up in a padded cell, or executed together with all your collaborators, at the earliest opportunity.
You are a liar. You are lying when you try to substitute your “Republic” for our Republic and confuse the two things. You are a liar when you present the use of graphene to control people as something that can ever be controlled or used for good. You are a liar when you say you are a “Man of God” and yet offer to violate the Universal Law of Free Will which our Creator established as the Law for every living creature.
Get thee away, Satan, your time has come! And your son, Lucifer, too!
—————————-
See this article and over 3300 others on Anna’s website here: www.annavonreitz.com
To support this work look for the PayPal buttons on this website.