Full weekly report from Ben. [Note: this was supposed to auto-publish on 9-16, but somehow it didn’t. So here it is.]

The fake U.S. regime of the rubber-masked impostor “President” Joe Biden is in serious trouble.  They face a September 30th payments deadline they cannot meet.  Since there is a two-week grace period after the U.S. Corporation defaults, this means a repeat of the February 16th, 2020 market implosion is due on or around October 14th.  That is why U.S. Treasury Secretary Janet Yellen is publicly warning the U.S. will default on its national debt in October, MI6 sources say.  https://thehill.com/policy/finance/571237-yellen-us-on-track-to-default-on-national-debt-in-october

This is also why “Biden,” called Chinese President Xi Jinping last week.  When he failed to get promises for new funding, his boss, Angela Hitler called and was also told the money would only come if she vowed total obedience to China, Asian Secret Society sources say.  Here is how China’s official Global Times mouthpiece bragged about the conversation:

“The first phone conversation between the two leaders in seven months amid escalating tensions…which took place at the U.S.’ request, highlighted Washington’s growing anxiety and need for China’s cooperation on key global issues.”

China told “Biden,” the “U.S. should take actions to respect China’s basic interests, discard illusions of suppressing China,” and Xi Jinping “called on Washington to shoulder responsibilities to direct the ties back on the right track,” plus “the U.S. should take more action in correcting previous wrong deeds and respecting China’s basic interests, and not expecting China to cooperate while keeping it as an adversary.”  It also noted “the Biden administration is facing huge pressure domestically” so it must not “challenge, slander or even attempt to subvert the path and system of socialism with Chinese characteristics.”

The Global Times further noted that “Hours after the Xi-Biden call, Xi also spoke to German Chancellor Angela Merkel” and ordered her “to urge the EU to adhere to the right policies on China.” https://www.globaltimes.cn/page/202109/1233921.shtml

The “White House” responded by issuing the following veiled threat:

“The two leaders discussed the responsibility of both nations to ensure competition does not veer into conflict.” https://www.whitehouse.gov/briefing-room/statements-releases/2021/09/09/readout-of-president-joseph-r-biden-jr-call-with-president-xi-jinping-of-the-peoples-republic-of-china/

China later responded by suggesting recognizing terrorism as a transnational threat and “a common enemy of mankind.”

The White Dragon Society, for its part, is negotiating an alternative to the “Biden” regime with the Asian Dragon family that uses the Xi Jinping avatar. The proposal being discussed calls for…

ending “terrorism” by pulling the plug and letting the entire fake U.S. regime implode. The talks will continue this week after Dragon family negotiators consult with their elders over the next move, dragon family and WDS sources say.

In any case, patriots in the West need to realize it is vital to overthrow the Khazarian Mafia before they sell the Western people into Chinese slavery.

As U.S. General Michael Flynn said last week, “We are in the fight of our lives.”  He notes “there is nobody in the White House,” and talk of things like “Donald Trump in 2024” is nonsense since “there will not be another fair election until we get the 2020 one resolved.”  Flynn also noted there is an ongoing psy-ops against the American people. He urged patriots to come forth while noting that during the revolutionary wars only 3% of the U.S. population of 4 million fought.

We have a critical mass in the U.S. military, the intelligence agencies, the militias, etc. to fight a new revolutionary war.  To win means identifying the real enemy.  First of all, let’s look at the actions of President Donald Trump and consider if the cavalry is still coming. Die-hard Trumpers need to ask why he turned down the U.S. military when they offered him a chance to overturn the 2020 election theft.  Second of all, they need to explain why he is calling for everybody to be vaccinated even though, as Flynn notes, with a “99.5% recovery rate why are we going through this madness.”  Remember vaccine pusher Trump also failed to reveal the truth about 9.11.  In other words, U.S. patriots need to rally behind Flynn and not Trump.

So, who is the enemy we need to target?  The forensic trail, as usual, points to Switzerland and the Octagon group.  These people, through about 700 high-level operatives, control 90% of transnational corporations.  We know that Klaus Schwab (whose mother was a Rothschild) of the “Great Reset” World Economic Forum reports to Carl von Habsburg. https://en.wikipedia.org/wiki/Karl_von_Habsburg

We also know the Agnelli brothers, who own the Economist together with the Rothschilds, report to Vittorio Emanuele.  These are the people who control the rubber masked replacement of Pope Francis who now wants all humans to be vaccinated with DNA altering concoctions. https://en.wikipedia.org/wiki/Vittorio_Emanuele,_Prince_of_Naples

We also know that Biden’s boss Angela Hitler of Germany is another member of the Octagon group (the real-life Spectre of James Bond fame) politburo.

These people are pulling out all the stops now to stay in power.  That’s why their servant, U.N. Secretary-General Antonio Guterres (remember nobody elected him), last week issued a dire warning that the world faces “a pivotal moment.”  Guterres warns “conspiracy theories and lies [Orwellian speak for truth] fuel deep divisions within societies.”  He calls for an immediate global vaccination plan implemented by an emergency task force to invest “$50 billion in vaccinations now” and “to strengthen global governance of digital technology [i.e. censorshop].”  Guterres also reveals his masters control the G20, the U.N.’s Economic and Social Council and the heads of international financial institutions including the International Monetary Fund and World Bank.

In a sign of just what bold-faced hypocrites these people are he also proposed “global action to“tackle disinformation and conspiracy theories and to promote facts, science, and integrity in public discourse.”  OK Gutterface, why not start by providing scientific evidence SARS-Cov-2 and Covid-19 really exist, something nobody has done yet: as proven by multiple court rulings. https://apnews.com/article/technology-health-coronavirus-pandemic-united-nations-covid-19-pandemic-dcabfc7526f46940dc5a992d52737c8b

Anyway, if you are a patriot and want to protect people, shoot on sight anybody pushing DNA altering vaccines for this fake pandemic.

We note that a mass revolt against the pandemic and vaccine-pushing criminals is underway in all Western countries.  Take a look at the huge audiences of football games chanting “fuck Joe Biden,” in unison. https://www.zerohedge.com/political/fk-joe-biden-chants-heard-across-us-college-football-stadiums

Other fake leaders like Justin Castro of Canada and Emanuelle Macron of France cannot appear in public for fear of being ridiculed or even hung on the spot.  There are also trucker strikes in the UK, Australia, the U.S., and elsewhere aimed at forcing regime change. https://www.rt.com/news/534591-paris-clashes-health-pass-protests/

In the UK, Health Secretary Sajid Javid says Covid jab passports won’t be introduced and that he did not expect the country to see any more lockdowns. https://news.trust.org/item/20210912090529-5m6aq

Also, multiple court cases against the fake pandemic and vaccine pushers are starting to have an impact.  For example, a Berlin court ruled in favor of a discothèque that sued over the city’s ban on indoor dancing, forcing the Berlin Senate to allow clubs to reopen.  The New York Times tried to spin this as only applying to the “vaccinated” but that was a bald-faced lie. https://www.nytimes.com/2021/09/11/style/berlin-clubs-reopening.html

Even more dramatically, German prosecutors raided both the Justice and Finance ministries over “money laundering.”  This is a sign the post-war occupation of Germany is about to end, German patriots promise. https://www.reuters.com/world/europe/german-prosecutors-search-ministries-over-money-laundering-probe-2021-09-09/?utm_source=reddit.com

In Japan, bars and restaurants are openly defying government orders to not serve liquor and shut by 8 PM.  Japanese gangsters have been given detailed information about how their fake government tried to kill their own people using contaminated Moderna vaccines and have promised to take action.  It won’t be long before Khazarian Mafia proxies like David Atkinson, Michael Greenberg, Kurt Campbell, and their ilk will be forced to flee the country, Japanese right-wingers promise.

There are also signs of Khazarian rats trying to abandon ship.  This was seen when the long-dead “George Soros” (a Rothschild proxy) denounced the BlackRock fund’s move to China as a “tragic mistake” that would “damage the national security interests of the U.S. and other democracies.”

A BlackRock spokesperson responded to Soros’ comments by telling CNBC  “the United States and China have a large and complex economic relationship,” adding that “total trade in goods and services between the two countries exceeded $600 billion in 2020. https://www.zerohedge.com/markets/blackrock-responds-soros-scathing-op-ed-ray-dalio-also-chimes

The Chinese government outlet Global Times responded by calling Soros a “global economic terrorist” Since the Chinese are calling “terrorism” the enemy of all humans, you can guess what will happen next.

MI6 says “They have all been found out and are fighting it out amongst themselves,” and adds “the Rothschilds are common filth and this is known around the world.”

Of course, these criminals do not plan to go quietly into the night.  They are trying to engineer food shortages, start a war with Iran, and do god knows what else to try and stay in power.

In order to stop attempts to start WWIII we find ourselves repeatedly warning the Asian elders the Iranian leadership works for the same people as the Israeli leadership does:

“President Rouhani and Foreign Minister Zarif are rats, doing the bidding of the Rothschild Chatham House boys and the Royal Institute of International Affairs.

Rouhani spent 6 years in Scotland getting his Ph.D. in Sharia Law (of all things), hanging with Jack Straw and Lord Levy, one rung down from Rothschild.

Zarif was 20 years in America and very close to Globalist John Kerry. They say half of the Iranian parliament (the pyramid with 33 windows) has a U.S. Green Card.” https://www.rumormillnews.com/cgi-bin/forum.cgi?read=182314

It is also looking increasingly likely the KM is going to shut down the internet in a vain attempt to stop the ongoing global awakening. That’s why they are talking about a “once in a century superstorm that could knock out the internet.” https://ktvz.com/cnn-regional/2021/09/10/growing-risk-of-once-in-a-century-solar-superstorm-that-could-knock-out-internet-study-says/

On a final note this week, we would like to share the following exchange we had with Sean Stone, the self-described son of movie director Oliver Stone, about the death of Robert David Steele:

“The investigation into the death of RDS has revealed that he was murdered by injection because he was investigating the embezzlement of $300,000 of his funds.  You have emerged as a person of interest.  What do you know about all this?”

This was his non-answer:

“Are you working with Gordon Duff? If so, please ask him to have Jack Heart contact me as I want to talk with him about his work…”

If somebody implicated me in a murder, you can be sure I would respond.  Remember Oliver Stone proved himself to be a controlled opposition when he made a movie saying almost everybody was involved in the assassination of President John F, Kenney and yet failed to say anything when released documents show Israeli President David Ben Gurion ordered the assassination.

To conclude, enough is enough folks, time for talk is long past, this is war. That means to kill or be killed. 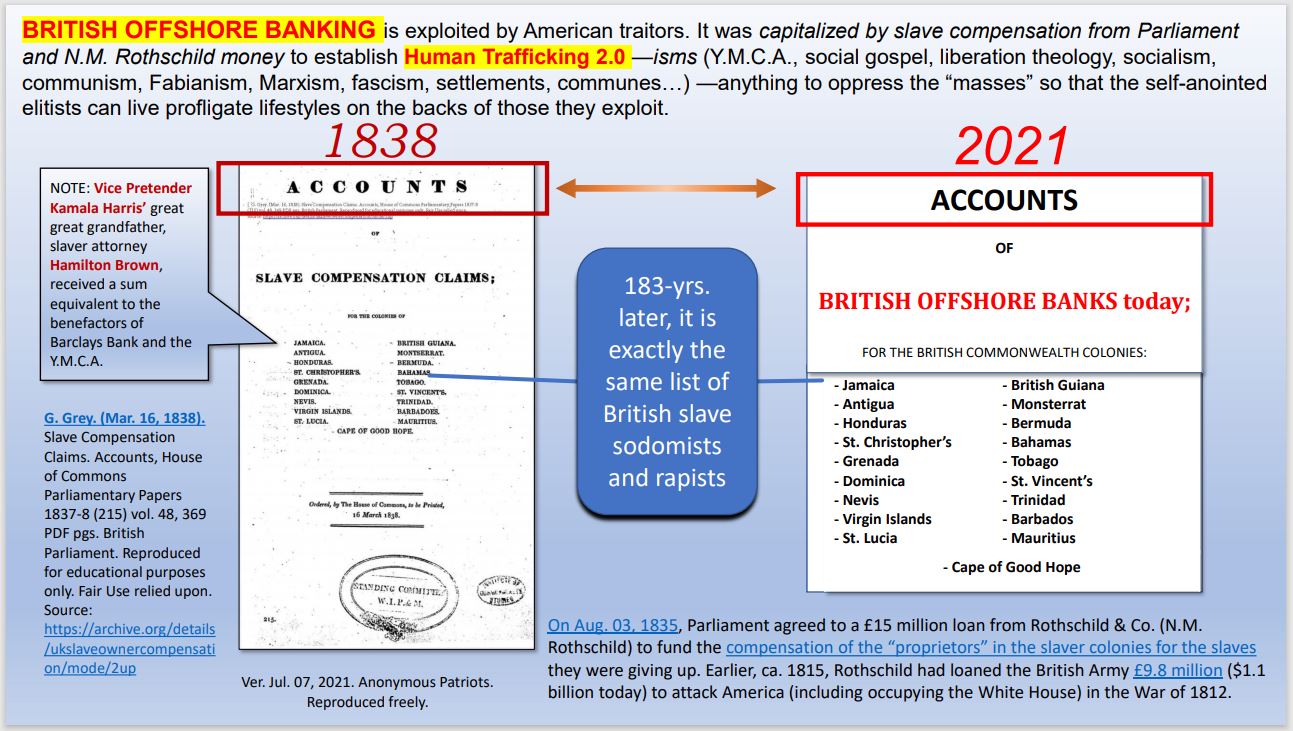 Remember where you first read about Hamilton Brown? Here are some links to refresh your memory:

KAMALA HARRIS HAS A MUCH BIGGER SLAVE REPARATIONS PROBLEM THAN 99.95% OF THE AMERICAN WHITE POPULATION