It is little wonder that between 2016 and 2018 the public was being bombarded with Hitler this and Nazi that. This was the narrative laid out by George Soros himself during the January 2007 World […] 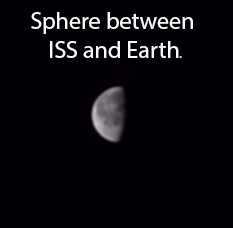 The YouTube account of MRBBB3333  received this video from Mary Hall, she saw this sphere below the ISS in their video feed.  It’s of a fairly large sphere matching the orbital speed of the ISS on the night side of the Earth.
For a number of years a lot of people I know have been reporting that the “moon is in the wrong place”.  I think I’ve heard this about as far back as 2013.  It evolved over time into a kind of a joke about the moon pilot being drunk, but nobody really had an explanation for the observations being made.
In 2013 Brian Kelly telephoned me and said “get down to Carlsbad Beach!, a huge UFO just flew over my apartment! Brian at that time lived in Encinitas California about 5 miles from where I lived.  I drove to the beach and saw what looked like a large orange full moon over the Pacific Ocean.  It was dark when I arrived.  Nice reflection in a very still ocean. So I drove home thinking it was a full moon and unconnected to what Brian saw fly over his house, until I got home and remembered that it was a new moon just the week prior and it couldn’t possible a full moon, not enough days had passed.  By then the sphere had vanished.
Is what follows the explanation of these “drunken moons”?  I don’t know but it’s something to think about.  Its clear there’s more than Earth built “tic tac ships” flying around out there!

Terran to Denice: Does Stan X know what this sphere is?

Stan X: TERRAN. THERE ARE MANY COMPLETED BY SSP/FORMER SSP “ORGANIZATIONS.” DATA COLLECTORS.STAN.X.END.

Terran: Are these structures built in Zero G? Underground? Antarctica? How big is their largest one?

Terran: Are these built with replicated materials? Just the mineral requirements for a 4600 km ship would leave a huge fingerprint here in the markets and mining industries.

Stan X: TERRAN. THAT IS THE LIMIT OF THE DATA. DATA COLLECTORS. STAN.X.END.

Social Darwinism / Elitism The elite believe they are a more advanced form of human. In order to justify their belief they grafted Darwin’s theories of biological evolution onto social organization to create Social Darwinism. Over the centuries they have referred to the public variously as cattle, sheep and “its” (as Plato did in The […]

Apparently, the word never got through to you explaining what happened at the November 11th “double meeting”.

Kyle and Company wanted to come to the meeting Katherine was holding and present a Go Forward Plan — people could discuss it and do what they wished.
Okay, good enough.
We finally convinced Katherine to allow this, because these people are still members and any member or group of members can bring things forward for discussion.
But instead of simply following instructions and going to the regular meeting that Katherine was hosting, Kyle decided to do a separate meeting, which was not according to plan.
Then to make matters worse, Teri was told that Harold removed Katherine —- something that Harold didn’t do and doesn’t have authority to do— but Teri didn’t know that, so, that’s why she said what she said.
Anyway, a nice bunch of unnecessary chaos, misunderstanding, and drama on all sides.
I had to step in and straighten it all out, which I did.
Soon after, both Joanne and Kathy Bainbridge finished the vetting process to become Co-Coordinators in Texas,  They had been in this process for weeks prior to all the frou-frou-rah on November 11.
Unfortunately, their appointment as new Co-Coordinators came soon after the November 11 boondoggle and people thought there was something fishy about this and that the Federation was playing politics.
The truth is that anyone who is eligible to stand as a State National can become a Coordinator by volunteering and being vetted and learning the ropes.  That includes you.
Kathy and Joanne volunteered a long time before all this infighting erupted and simply finished the process soon afterward.
Then, I called Katherine, Kathy, and Joanne together and observed the need to put all this acrimony in the rearview mirror, start acting like adults, and work together.
But even as my words were being said, the Texas Vetting Committee was busy pursuing more bad behavior.
The Vetting Committee had just received a week’s worth of training and coaching from Shannon Bookey and had successfully completed several vetting interviews with other people, when Doug Lochbaum came to be vetted as a Recorder — and the Vetting Committee threw everything they’d been taught right out the window, didn’t follow procedures and processes Shannon taught them, verbally attacked Doug during the interview in a patently biased fashion, and evaded having Shannon there even though they were supposed to include him in any interviews for positions that deal with money.
When they were caught in this dirty dealing the members of the Vetting Committee had the audacity to try to blame Shannon and the Federation for their own wrong-doing.
Read that — we spent the time to teach these men how to do vetting and do it properly, but when it came to Doug Lochbaum, they railroaded him and then tried to blame us for their malfeasance.
Angry?  You bet I’m angry.
Nobody should ever be treated like Doug Lochbaum was treated by that Vetting Committee.  And no Assembly should be running around making accusations and being hateful and doing the crap that The Texas Assembly has pulled.
You are all acting like five year-olds  who need a nap or worse.  So shape up or get out.  This infighting and nastiness has got to stop, and one way or another, it’s going to stop.
Guaranteed.
Despite all the crappola the Vetting Committee pulled, I went back to the three Coordinators and gave them the same pep talk again, about getting their acts together and pulling for the people of Texas.
The words had hardly stopped vibrating, when another Assembly Meeting came up, and it was announced out of the blue that Rene Lowery was now a Justice and also seated on the Vetting Committee.
Well, there are numerous problems with that.   Rene is a licensed real estate broker (read that, she works for the Queen) and a financial broker.  She has a conflict of interest ten miles wide.  She isn’t eligible to serve as a Justice.
Not only that, she wasn’t elected by any due process electoral proceeding as described in The Jural Assembly Handbook.
And Rene wasn’t appointed to the erring Vetting Committee by any consensus of the three (3) Coordinators, either.  Katherine just took it upon herself to make the appointment without even telling Joanne or Kathy a word about it.
Not only  that, but at the same meeting, there was another transparently planned attack on both Doug and Joanne Lochbaum in which the perpetrators, the Katherine Us or Them Supporters, pretended to be the victims.  Where have we seen that before?
Now, I am going to put this as bluntly as I possibly can —- you people all need to settle down and play by the rules and work together, or the Reset Button is going to be pushed again.
I dissolved The Texas Assembly once and I will do it again until I get leadership that understands the goals and does the work and builds the community spirit required for success.
—————————-
See this article and over 3400 others on Anna’s website here: www.annavonreitz.com
To support this work look for the Donate button on this website.