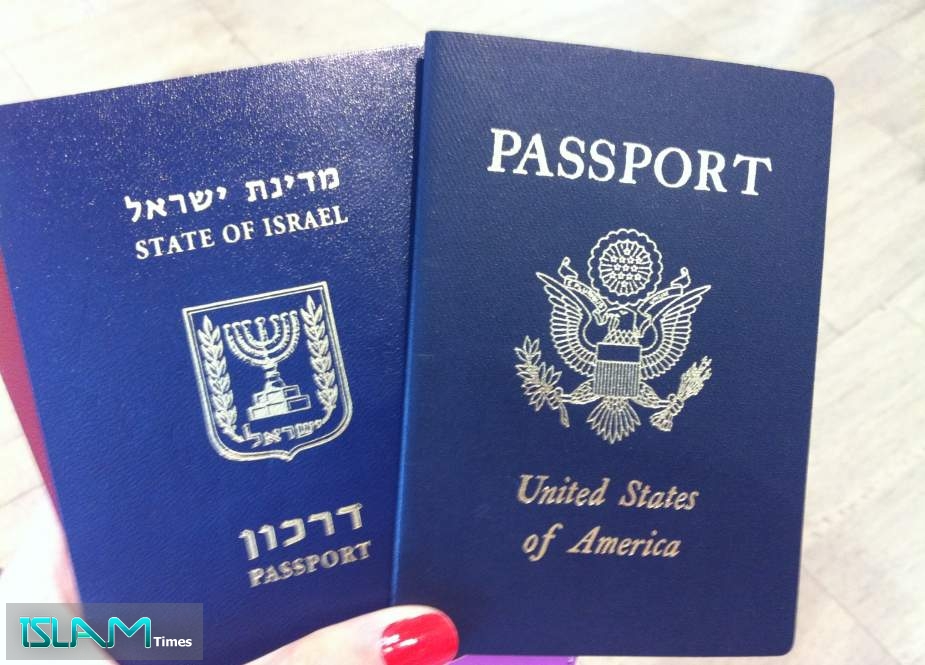 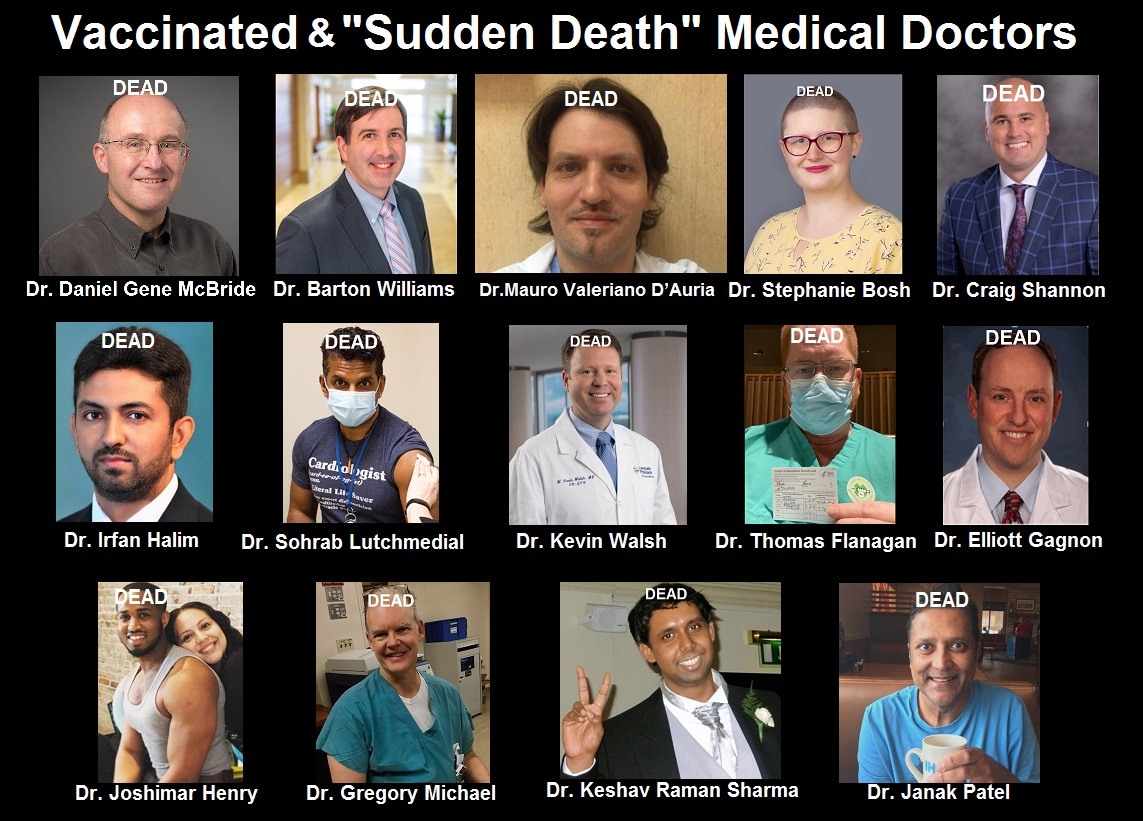 The corporate media tries to hide these stories, because it is bad business for their main sponsors, large pharmaceutical companies like Pfizer.

It has been widely reported in the Alternative Media this week that the public is catching on to the fact that when publicly visible people die, the corporate media is hiding their COVID-19 vaccination status, so searches such as “died suddenly” or “died unexpectedly” have soared in recent weeks, as this is how the corporate media typically now reports these deaths of otherwise healthy, young people.

So here is an update of medical doctors who have died after receiving a COVID-19 shot, or when their vaccination status is not mentioned, died suddenly or unexpectedly.

If this is just a small sampling of the total deaths that have become known through media reports, the hospital system could be in serious trouble, as many unvaccinated medical doctors have already been either fired or have quit due to COVID-19 vaccine mandates, and those mandates for medical staff to be completely vaccinated kick in on January 4th.

According to Forbes, about one third of hospital staffs in the U.S. are not yet “vaccinated.”

If most of these staff end up quitting or being fired, who is going to be left to run the hospitals??

Here are some recent reports of medical doctors who “died suddenly.” In almost all of these stories in the corporate media they will blame the deaths on “COVID.”

And why not? A patient who dies with a COVID diagnosis is worth about $100,000.00 of reimbursements to the hospitals, which is why you see reports of people dying in motor vehicle accidents or from gun violence being diagnosed with “COVID” even after they are dead. 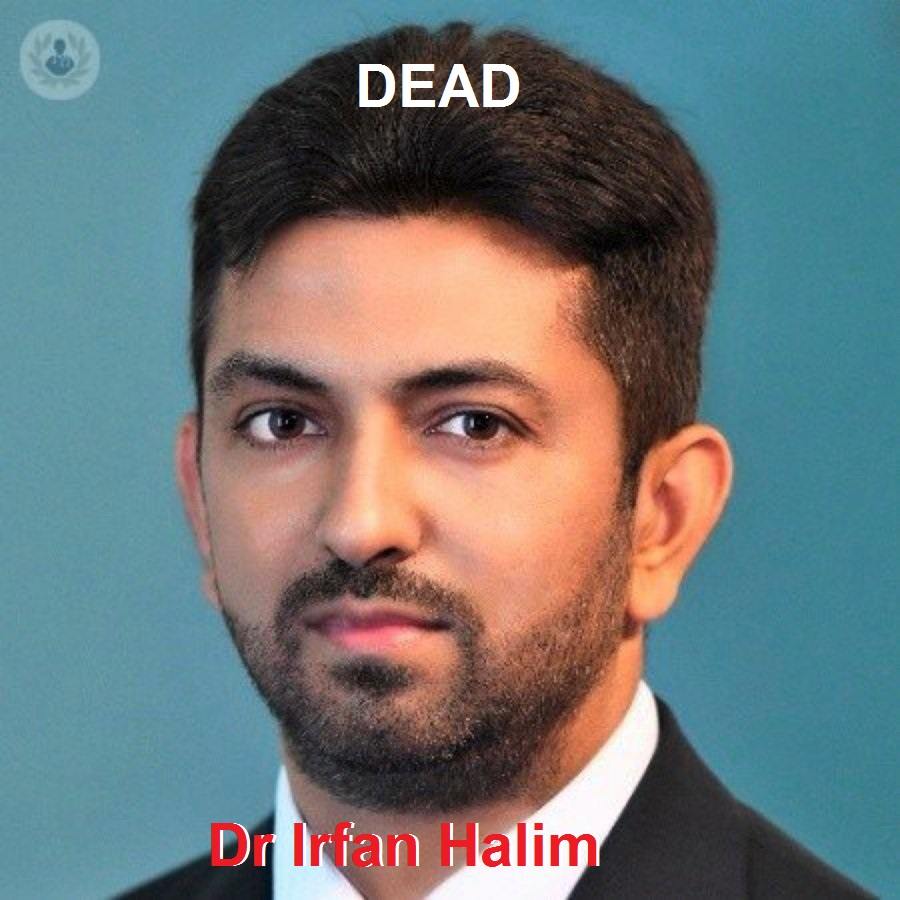 Here are some more published by The COVID Blog.

Reap what you sow? Doctors dropping like flies in deaths described as “died unexpectedly” and “died suddenly” since mid-October

by The COVID Blog

Read their stories on The COVID Blog. 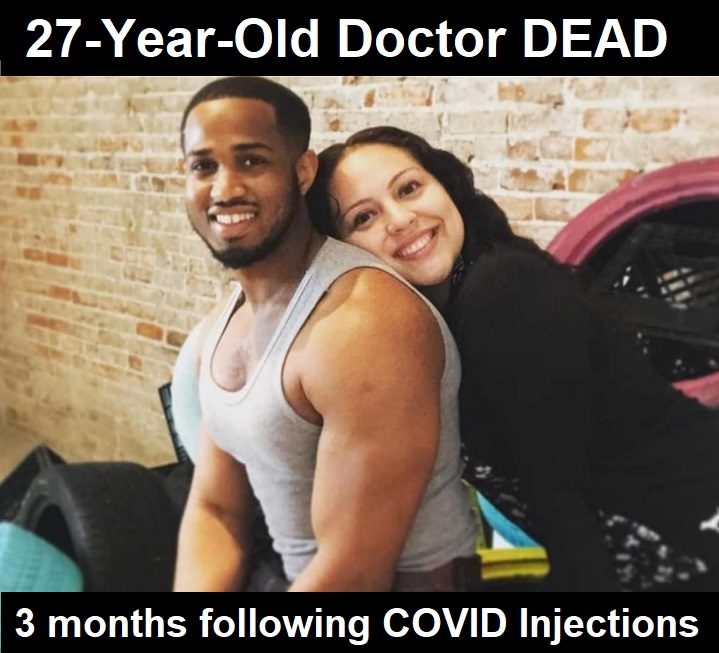 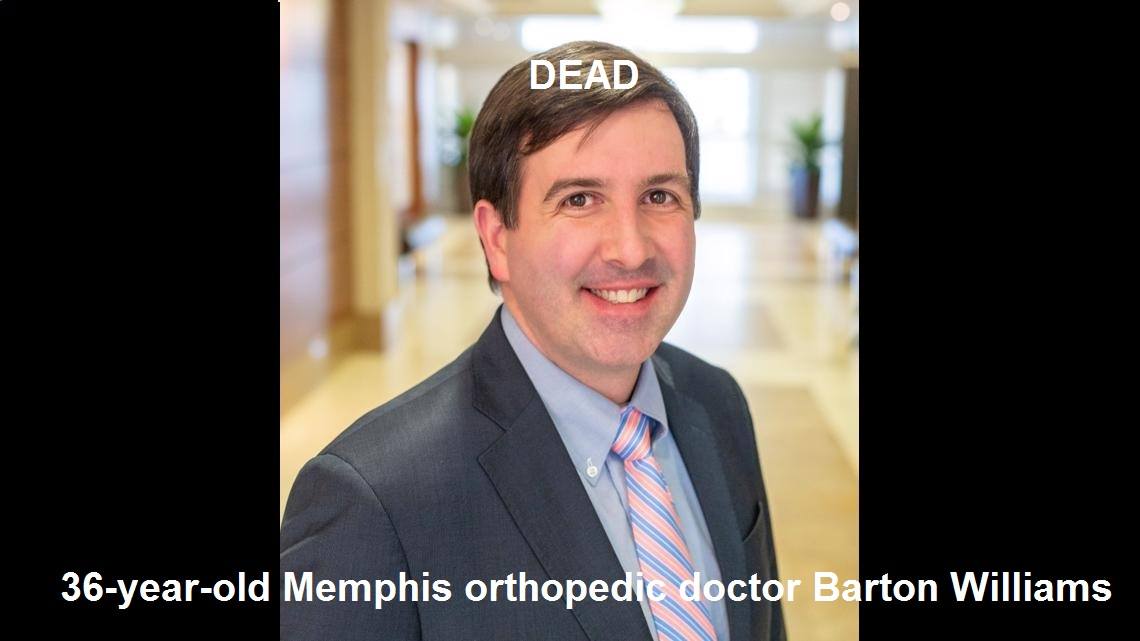 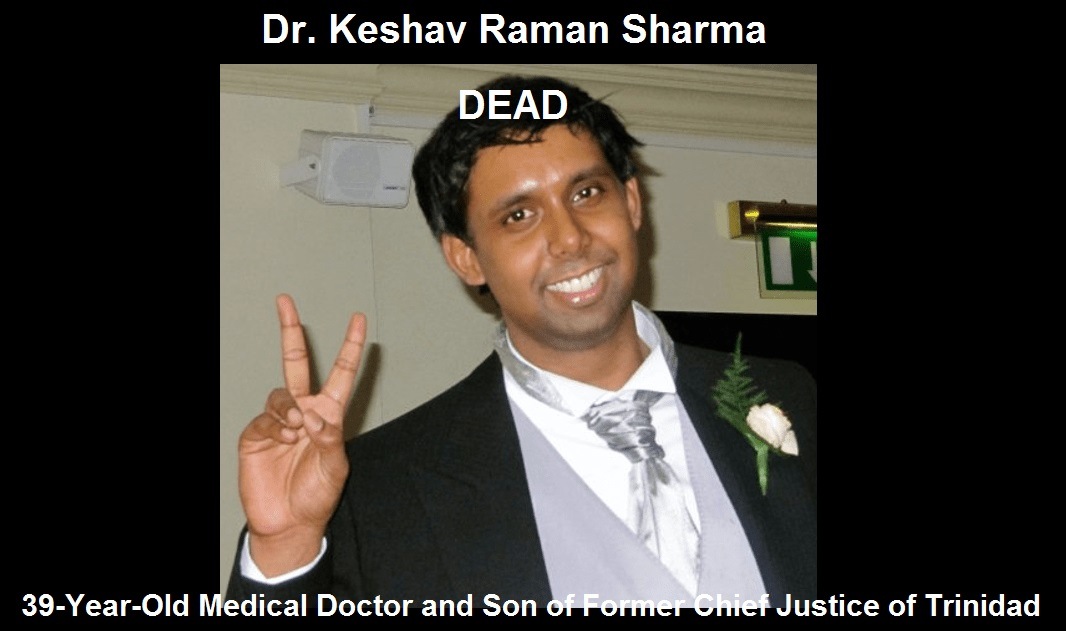 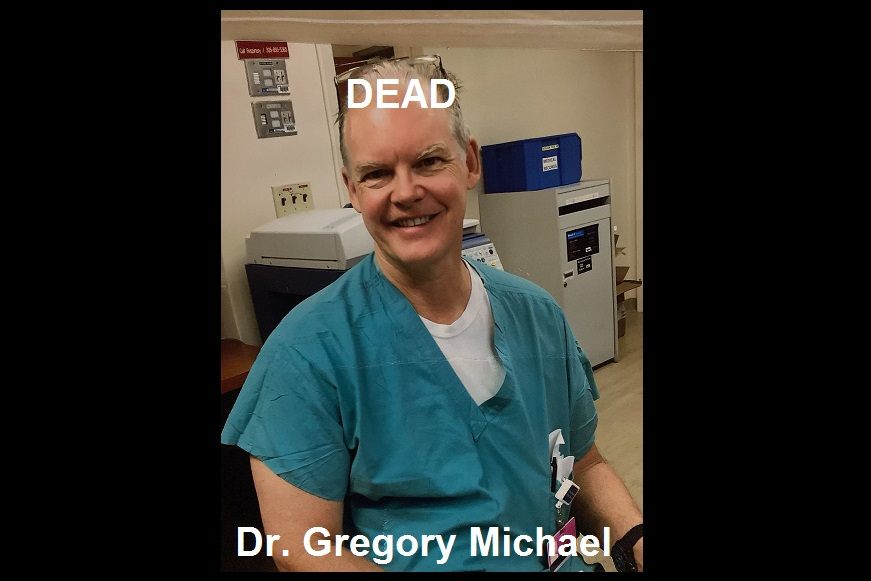 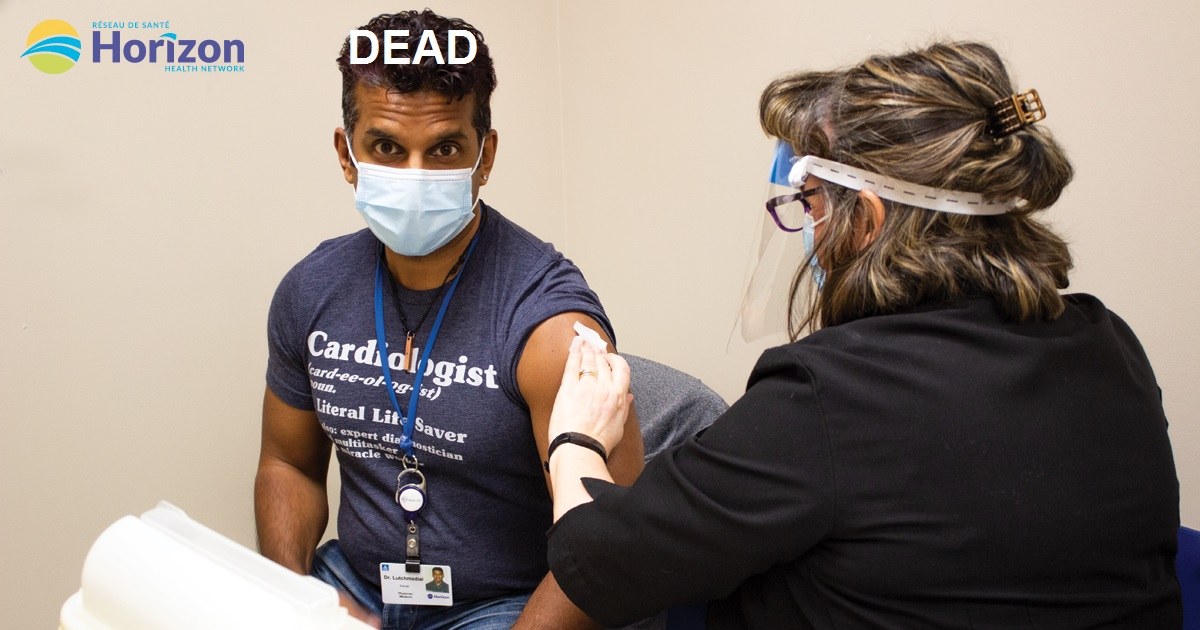 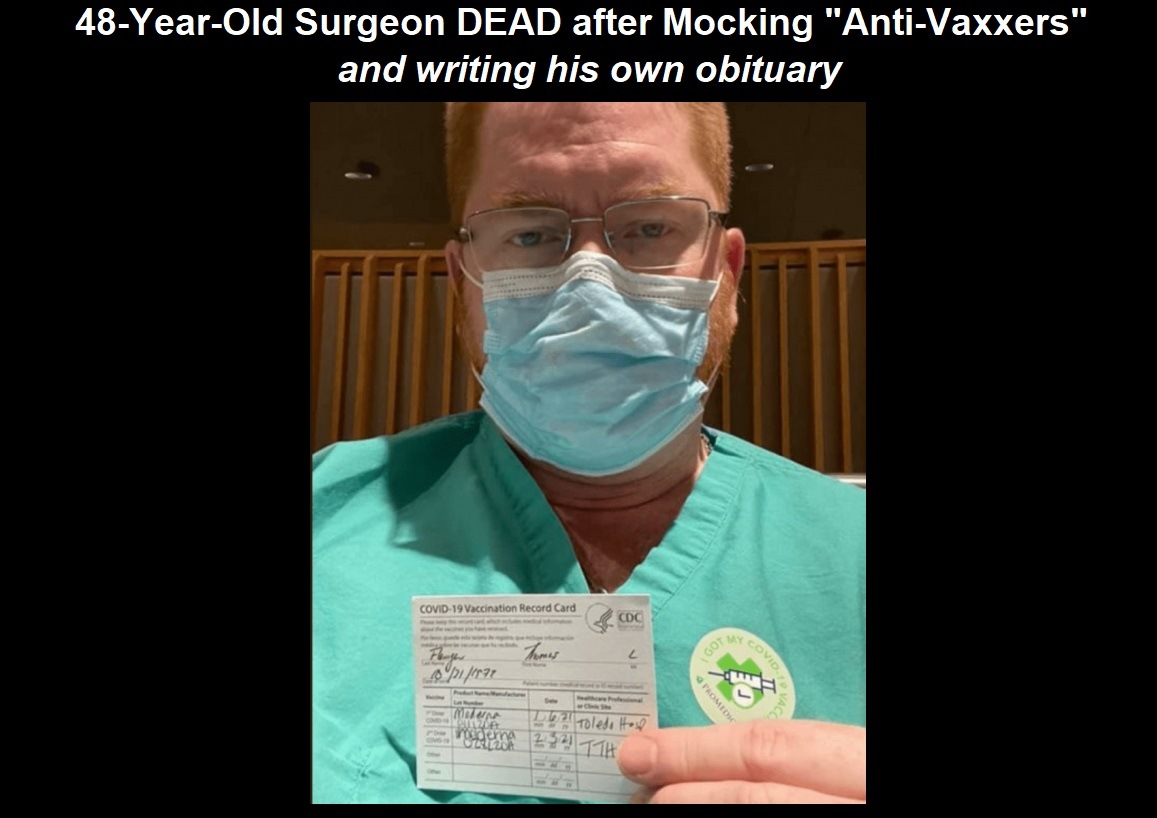 From our Bitchute channel.

Aside from the potential problems that can arise when a vaccine is rushed to market, the vaccine may be problematic from the get-go because amyloid beta may be a symptom of Alzheimer’s — not the cause — and could even have a protective role in the disease process.3

Fast-tracking a vaccine that’s targeting an isolated element of Alzheimer’s disease that is not the underlying cause is destined to be a massive disaster.

Alzheimer’s Vaccine Being Fast-Tracked to Market

UB-311 is being touted for eliciting a “robust and durable anti-amyloid beta antibody responses in patients,” according to Vaxxinity.4 Phase 1, Phase 2a and Phase 2a long-term extension trials have already been completed, with the company stating that the vaccine was “well tolerated in mild-to-moderate AD patients over three years of repeat dosing, with a safety profile comparable to placebo and no cases of amyloid-related imaging abnormalities-edema (“ARIA-E”) in the main study.”5

ARIA-E, a marker of fluid retention and microhemorrhages in the brain, occurs in about one-third of people taking the Alzheimer’s drug aducanumab (brand name Aduhelm).6 Similar to UB-311, Aduhelm was brought to market under an accelerated approval pathway by the FDA, despite uncertainty about the clinical benefit.7 The action sparked protests within the FDA advisory panel, and three members subsequently resigned.8

As an amyloid beta-directed antibody drug, Aduhelm also works by targeting amyloid beta in the brains of people with Alzheimer’s disease, but the findings of ARIA-E in many taking the drugs are alarming. Adam Brickman with Columbia University, New York City, suggested that the drug could potentially make cognitive decline worse instead of better. “It’s hard to put a positive spin on the neuroimaging abnormalities,” he wrote. “… [W]e simply do not know the long-term consequences.”9

While Vaxxinity is touting no cases of ARIA-E among its subjects as a success, the same holds true about the vaccine in that no one knows the long-term consequences. Vaxxinity has planned a Phase 2b trial for late 2022.10 It’s worth noting that drug development for Alzheimer’s has so far been a dismal failure, with at least 300 failed trials to date.11

One study, which was a collaboration between Washington University in St. Louis, drug companies Eli Lilly and Roche, the National Institutes of Health and others, involved 194 participants, of which 52 took Roche’s drug gantenerumab and 52 took Eli Lilly’s solanezumab.12

The drugs were intended to remove amyloid beta (A?) from the brain, but they failed to achieve the primary outcome of the study, which was slowed cognitive decline, as measured by tests on thinking and memory.

Is Amyloid Beta the Problem?

Even if drugs reduce amyloid beta plaques in Alzheimer’s patients, how this translates to affecting cognitive decline remains to be seen. While Alzheimer’s is characterized by an accumulation of beta-amyloid plaques and neurofibrillary tangles in the brain, there is controversy over their role in the development of the disease.

As researchers from the Tokyo Metropolitan Institute of Medical Science, department of dementia and higher brain function, wrote in Frontiers in Neuroscience:14

“The so-called amyloid hypothesis, that the accumulation and deposition of oligomeric or fibrillar amyloid ? (A?) peptide is the primary cause of Alzheimer’s disease (AD), has been the mainstream concept underlying AD research for over 20 years. However, all attempts to develop A?-targeting drugs to treat AD have ended in failure.”

In 2009, researchers brought attention to the misguided premise of oversimplifying Alzheimer’s disease down to the amyloid-? protein precursor (A?PP) molecule, “implying that this molecule encapsulates AD so completely that the disease itself is almost of secondary importance.” This, they noted, ignores “the complexity of chronic diseases in general” and added:15

“A great deal of attention has focused on amyloid-? as the major pathogenic mechanisms with the ultimate goal of using amyloid-? lowering therapies as an avenue of treatment. Unfortunately, nearly a quarter century later, no tangible progress has been offered, whereas spectacular failure tends to be the most compelling.

We have long contended, as has substantial literature, that proteinaceous accumulations are simply downstream and, often, endstage manifestations of disease.

Their overall poor correlation with the level of dementia, and their presence in the cognitively intact is evidence that is often ignored as an inconvenient truth. Current research examining amyloid oligomers, therefore, will add copious details to what is, in essence, a reductionist distraction from upstream pleiotrophic processes such as oxidative stress, cell cycle dysfunction, and inflammation.

It is now long overdue that the neuroscientists avoid the pitfall of perseverating on ‘proteinopathies’ and recognize that the continued targeting of end stage lesions in the face of repeated failure, or worse, is a losing proposition.”

Amyloid Beta May Be Protective

There is even research to suggest that advanced protein aggregation, such as that seen in Alzheimer’s disease, could offer protective functions, perhaps protecting cells from toxic intermediates.16 Writing in the Annals of the New York Academy of Sciences, researchers suggested that amyloid beta is a response to neuronal stress, one that functions as a protective adaptation to the disease.17

“Mutations lead to cellular stress, which, in turn, leads to increased amyloid-? … in AD, cellular stress precedes increases in amyloid-? … Proteins, such as amyloid-?, that are induced under oxidative conditions and act to lessen oxidative damage are typically thought of as antioxidants and, in this regard, we recently demonstrated that amyloid-? is a bona fide antioxidant that can act as a potent superoxide dismutase.”

This would explain, they suggest, why the brains of most elderly people contain amyloid-?, often in amounts similar to those found in patients with Alzheimer’s disease (AD). They noted:19

“While such production and deposition of amyloid-? appears to successfully stave off age-related redox imbalances in normal aging, in AD, where there is a profound and chronic redox imbalance, the presence of amyloid-?, even at high levels, proves insufficient.”

The Link Between Alzheimer’s and Your Gut

If Alzheimer’s pathogenesis cannot be blamed entirely on amyloid beta, what, then, is the cause? It’s likely that many factors are to blame, with imbalances in gut microbiota among them. Research suggests, for example, that the bacteria in your intestines may influence brain functioning and can even promote neurodegeneration.20

In a study of 89 people, high blood levels of lipopolysaccharides (LPSs) and the short-chain fatty acids (SCFAs) acetate and valerate were associated with large amyloid deposits in the brain.21 LPSs and SCFAs are markers of inflammation and proteins produced by intestinal bacteria.

High levels of butyrate — an SCFA produced when gut bacteria ferment fiber —were associated with less amyloid. The study represents a continuation of prior research by the team, which found that the gut microbiota in people with Alzheimer’s disease differs from those without the condition; in those with Alzheimer’s, microbial diversity is reduced, with certain bacteria being overrepresented and other microbes decreased.22

“Our results are indisputable: certain bacterial products of the intestinal microbiota are correlated with the quantity of amyloid plaques in the brain,” explains Moira Marizzoni, a study author with the Fatebenefratelli Center in Brescia, Italy.23

Still other research suggests gut microbiota may contribute to Alzheimer’s risk via multiple avenues, including by influencing aging, diabetes, sleep and circadian rhythm.24

It’s also possible, researchers hypothesize, that decades of factors such as diet, stress, aging and genetics, combine to disrupt gut permeability and the integrity of the blood-brain barrier, allowing the entry of inflammatory agents and pathogens and inducing an inflammatory response that triggers a neuroinflammatory response in the brain.25

UB-311 — the fast-tracked Alzheimer’s vaccine — is not going to touch the many complex factors leading to the development of Alzheimer’s disease and is likely to have unintended adverse consequences. Dietary factors, for instance, are being completely overlooked by focusing on a vaccine to target amyloid beta.

Not only does what you eat affect your gut health but it also impacts cholesterol, and cholesterol also plays an important role in the formation of memories and is vital for healthy neurological function. As noted by senior research scientist Stephanie Seneff, Ph.D., insufficient fat and cholesterol in your brain play a crucial role in the Alzheimer’s disease process, detailed in her 2009 paper “APOE-4: The Clue to Why Low Fat Diet and Statins May Cause Alzheimer’s.”26

Animal and laboratory studies demonstrate that the spice saffron is neuroprotective, for instance. Data also show it is as effective as the drug memantine to treat moderate to severe Alzheimer’s disease.27 One of the most comprehensive assessments of Alzheimer’s risk is Dr. Dale Bredesen’s ReCODE protocol, which evaluates 150 factors, including biochemistry, genetics and historical imaging, known to contribute to Alzheimer’s disease.

In his book, “The End of Alzheimer’s: The First Program to Prevent and Reverse Cognitive Decline,”28 which describes the complete protocol, you will also find a list of suggested screening tests and the recommended ranges for each test, along with some of Bredesen’s treatment suggestions.

Overall, nourishing your brain health is best done with a comprehensively healthy lifestyle. By leveraging 36 healthy lifestyle parameters, Bredesen was able to reverse Alzheimer’s in 9 out of 10 patients.

This included the use of exercise, ketogenic diet, optimized vitamin D and other hormones, increased sleep, meditation, detoxification and the elimination of gluten and processed food. For more details, you can download Bredesen’s full-text case paper online, which details the full program.29