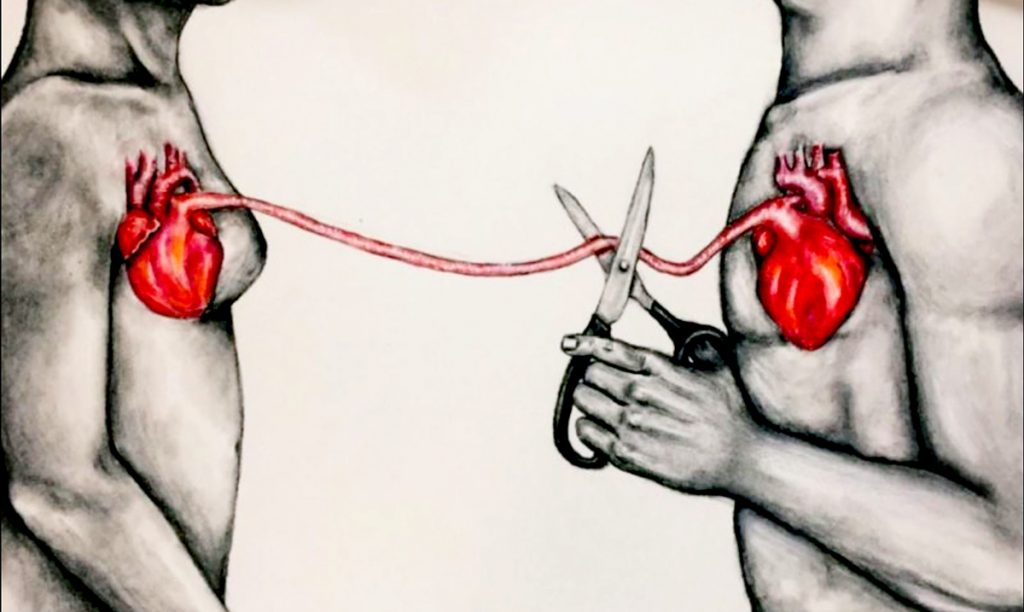 Have you ever felt yourself completely bogged down and drained? Do you find this feeling is further exasperated when you are trying to remove someone from your life?

Have you ever removed someone from your life only to find that they regularly show up in your thoughts, as if they are maintaining a hold on your mind? If you answered yes to any of these questions, then you may be experiencing an energetic connection between you and another person through what is called an ‘etheric cord.’

Etheric cords are like an energy link that develops between two individuals. This may include a sibling, parent, ex-spouse, child, lover, current spouse, close friend or even a work colleague. These cords form like tubes, connecting you from chakra to chakra. Energy flows freely along these tubes back and forth between people, however, there are times where the energy flow is one sided, draining from one person toward the other.

If you feel as though you are done with a person in your life; however, they are still draining energy from you then you need to take the steps to cut the cords for your own physical, mental and emotional well-being. There may also be people that you are unable to remove from your life, however, you find that your connection is draining, such as a family member. You can still cut these cords to preserve your own energy levels.

SIGNS AND SYMPTOMS OF HEAVY CORDING INCLUDE:

HOW TO CUT THE CORDS

In order to cut the cords, you need to find a quiet, private spot where you are not going to be interrupted. Close your eyes and allow yourself to visualize the energy cords that are extending from your body. They may present in different colors or different places depending on the type of relationship that they represent.

You don’t need to worry about understanding who the cord represents, or whether you are imagining all the cords that exist. In order for the exercise to be effective try not to force the process and remain open to what you experience.

Allow yourself to visualize a large golden sword in your hands. Feel the power from this sword flowing through your hands. Lifting your arms, allow yourself to cut through each of the cords. As you move the sword, state the following vocal affirmation: “I am now willing to release all fear-based attachments.”

As the remnants of these cords fall away from your body, visualize a golden white light coming in from the universe and down through your crown chakra in the top of your head, filling your body with its warm, comforting light. As you feel your aura filling with this light, slowly come back to your current location, feeling the ground beneath your feet.

Anytime that you feel as though you are being drained by these emotional connections, repeat this exercise. It may seem simple; however, it is highly effective.

The apparent murder of Jeffrey Epstein is sending shock waves around the world, jolting more people awake to the fact that the deep state is so dangerous that even prisoners are not safe from being murdered.

It has now become apparent to every thinking person that America is occupied by an enemy force, a corrupt criminal cartel [that] will kill anyone that gets in their way or threatens their power.

Jeffrey Epstein, of course, could have testified to the fact that Bill Clinton is a serial rapist and child abuser whose perverted crimes have been covered up by the complicit left-wing media for decades.

Testimony from Epstein could topple the entire house of cards and expose the sick, Satanic child sacrifice and rape rituals [of Luciferians in politics].

Facebook's plan to hook ad-cash-deprived mainstream outlets on licensing payouts seems to be an attempt to hijack narrative control en route to total domination of the infosphere – the ultimate safe space, Zuckerberg-style.

More than two thirds of American adults get their news from social media at the same time that more than half expect that news to be "largely inaccurate."

Perhaps sensing a business opportunity, Facebook has moved in to manage that news consumption, reportedly offering mainstream outlets millions of dollars per year to license their content in order to present it to users authoritatively, as "Facebook News" – having long since ceased trusting users to share news among themselves.

But trusting Facebook to deliver the news is like trusting a cheetah to babysit your gazelles – all that's left at the end is likely to be a pile of bones.

From Robert David Steele to All Those Who Appreciate Dave Bertrand As I Do:

There are a tiny handful of people that I trust completely and rely on heavily for perspectives not achievable through the Mainstream Media (MSM) and the controlled social media (I coined the term #GoogleGestapo) that censors, manipulates (polls, trends, search terms), and digitally assassinates conservative voices. I value what Dave does.

For all of you are on the fence about Donald Trump for 2020, I want to say three things:

01 You are right to be concerned.  Although he still has my vote at this time, I have told him via the White House comment line that he is on probation.  He is not doing enough to defend the Constitution, especially the 1st Amendment that has been smashed by both #GoogleGestapo and 27 states making it a felony to criticize Israel; he has not fulfilled his primary promises with respect to 9/11 disclosure, leaving NATO, and withdrawing from the Middle East where we have spent $7 trillion and have nothing to show for it; and he has done NOTHING to reach out to the 70% of our eligible voters who are disenfranchised — the Independents, Libertarians, Greens, Sandernistas and #WalkAway, and Tea Party particularly.  His arrogance on this point is scaring me.

02 He has fourteen months in which to pull a series of rabbits out of the hat, and I believe he will begin doing that in September when I have been told to expect both a Global Currency Reset (including a gold-backed dollar and a $1.5 trillion bottom-up investment in US local economies and infrastructure), and full disclosure of the secret space program including the release of free energy which makes possible unlimited desalinated water. I am  told he is thinking about eliminating the IRS and the federal income tax in favor of the Automated Payment Transaction Tax that would apply to ALL transactions and particularly Wall Street currency and stock transactions — this will triple potential revenue while taking the tax burden of those of us that work for salaries. I am sticking with the Donald until 1 January 2020 and will make my final decision on that day.

03 There is something all of us can do to send him a strong message of concern. Donate a token amount to Marianne Williamson, the only authentic Democratic candidate, whose book A Politics of Love I have reviewed most favorably.  See my letter to the First Lady and the three book reviews within that letter, below. We need more of what Williamson is talking about — more love, more focus on citizen pain, less Yada Yada Yada. The Democratic Party is trying to smash both Williamson and Tulsi Gabbard with smear campaigns.  It is my view that it serves the President, the Republic, and each of us to get her into the third debate.

I will tell you that I am  thinking about how best to pressure the President into embracing #UNRIG (Unity with Integrity: Election Reform Act), at the second link is my personal message to the President as submitted via the White House comment line.  It’s time to put the public back into the government. I believe Donald Trump can and will do  this, but he needs some encouragement from us right now, and it is my believe that drop-kicking Williamson into the third debate is a helpful gesture by all of us.

Memorandum for the First Lady: Subject – A Politics of Love (the book and the author), you, your husband, and America UPDATE 1: Zionists Block Delivery of Mail

Therefore I urge you to donate, as I have, to the second link (watch out for default options, make sure it is a single donation not a recurring donation) and you can skip the stupid account creation and password demand). She is a catalyst for change.

Like all of you and Brother Dave, I believe in “trust but verify.”  I have published a Trump Report Card by Paul Adams that is grounds for concern but I also believe Q and others I am speaking to, who assure me the President has a plan and will come through for us in defending the Constitution, ridding America of foreign parasites controlling our Congress with blackmail (see my reports on Epstein at http://tinyurl.com/Epstein-Not-Dead, http://tinyurl.com/Nine-Veils-Evil, and http://tinyurl.com/Mossad-Epstein). He needs a push on the #UNRIG front. Let’s let him know he is on probation with a token donation to Marianne Williamson.  Please.