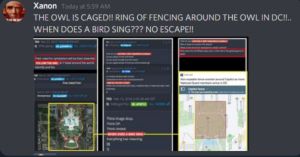 [Kp update note: this is from an anon, so since I’ve not seen a map of the fence layout, I cannot confirm this.]

According to this, it appears that the entire “owl” (Moloch; formed by the layout of streets in DC) has been “security fenced in”. Perhaps this will encourage more of the deep state actors to “sing” (see Q drop 753).

From Santa’s new Twitter channel (GoSammyUhHuh). I believe she mentioned this in this new video (part 1 of 2) (may have been part 2, though).

The new website https://pedoempire.org is rocking — and has been noticed internationally as well as across the USA and Canada particularly. The tag cloud is what makes the difference.  Below for quick reference is the tag cloud (being updated as each chapter is loaded) but the original is better because it shows those related to pedophilia and child torturer and murder in relative size.